The Palles Society for Private Law was launched in Trinity College Dublin on Thursday 22 November 2018 last. The Honourable Russell Brown, Justice of the Supreme Court of Canada, delivered a keynote lecture on the topic of

Indeterminacy in the Duty of Care Analysis.

The event was chaired by His Excellency Kevin Vickers, Ambassador of Canada to Ireland.

He then introduced the notion of indeterminacy, in the context of potentially limitless liability for pure economic loss. As Cardozo J famously put it in Ultramares Corporation v Touche 174 NE 441, 444 (NY, 1931), the law should not permit “liability in an indeterminate amount for an indeterminate time to an indeterminate class”. But Brown J’s thesis is that these concerns can be too easily overstated, and can be properly met by the sensitive and careful application of the Anns test. He warned against permitting the indeterminacy tail wagging the duty of care dog. And he argued, in particular, that the defendant cannot be liable for a risk of injury against which he did not undertake to protect, and that the Anns test provided a principled basis upon which to determine both the existence and the scope of a duty of care.

For Brown J, the the first question is always whether the law recognises that the subject-matter of the loss is one that ought to be compensable (referring to Saadati v Moorhead [2017] 1 SCR 543, 2017 SCC 28 (CanLII) (02 June 2017) in which the Supreme Court of Canada reached the same conclusion as Palles CB had done in Bell (above) though without the benefit of the Chief Baron’s judgment). He argued that pure economic loss sometimes occurs without injuring the plaintiff’s rights, and for that reason is irrecoverable. Hence, where the plaintiff suffers pure economic loss as a result of the defendant negligently damaging the property or person of a third party, the plaintiff has no cause of action in negligence against the defendant in respect of this relational economic loss (see Simpson & Co v Thomson, Burrell (1877-1878) LR 3 App Cas 279 (HL)). Since such relational economic loss is not a loss that ought to be compensable, much potential indeterminacy is avoided.

Brown J then argued that, even where the subject-matter of the loss may be compensable, no duty of care may arise having regard to the proper application of the proximity limb of the Anns test. He acknowledged that apex courts, including his own, have struggled to define proximity. For him, the plurality’s approach to it in Canadian National Railway Co v Norsk Pacific Steamship Co [1992] 1 SCR 1021 left much to be desired. Instead, he commended to us his own reasons, with Gascon J, in Livent (above) [25]-[26], [29]-[30] (internal citations omitted):

He argued that such proximity would be established where the defendant knew the identity of the class of plaintiffs who would rely on its representation; and he gave as an example of this the decision of the Supreme Court of Canada in Haig v Bamford [1977] 1 SCR 466, 1976 CanLII 6 (SCC) (01 April 1976). Here, a firm of chartered accountants were retained to prepare financial statements for a company which was seeking investors. The firm were aware that the company intended to supply the statements to a very limited class of potential investors, of which the plaintiff was a member. The statements were prepared negligently; the plaintiff invested, but took a loss. The Supreme Court of Canada held that the accountants owed a duty of care to the plaintiff. The precision of the approach in Haig was lost in Hercules Managements v Ernest & Young [1997] 2 SCR 165, 1997 CanLII 345 (SCC) (22 February 1997), but recovered in Livent.

Brown J acknowledged that attempts to establish cutoff points for the sake of cutoff points is often understandable, but he argued that they are unprincipled, and he concluded that indeterminate liability is best avoided by the proper application of the duty of care analysis.

After a lively session of questions and answers, the evening concluded with a presentation of a copy of VTH Delany’s biography of Chief Baron Palles to Justice Brown.

Justice Brown’s lecture provided the perfect launch for the Palles Society. It was presented with the support of the Private Law Group (PLG) in the School of Law, Trinity College Dublin, the Events Fund of the Faculty of Arts, Humanities and Social Sciences (FAHSS), Trinity College Dublin, and the Ireland Canada Business Association (ICBA). The Palles Society is very grateful to the PLG, the FAHSS, and the ICBA, for their generosity. 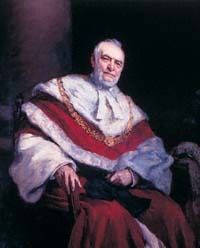 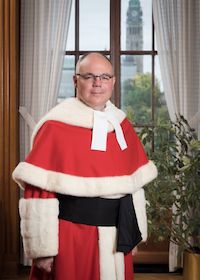